Founded in 2007 by James Balog, the Extreme Ice Survey (EIS) is an innovative, long-term photography program that integrates art and science to give a “visual voice” to the planet’s changing ecosystems. We believe that the creative integration of art and science can shape public perception and inspire action more effectively than either art or science can do alone. Over eight years we have positioned 43 cameras on 24 glaciers, and the time-lapse images we retrieve annually continue to demonstrate dramatic and alarming changes due to a warming climate. EIS gained worldwide fame in 2012 with the release of the award-winning documentary film Chasing Ice, produced by Exposure Labs. The film is available for purchase, may be licensed for home and group screenings (discounts for educators), and may be found on iTunes and Netflix. Our imagery is estimated to have impacted over 150 million people. Every week, Earth Vision Institute receives emails from around the world from people seeing the film for the first time. Chasing Ice opened the world’s eyes to rapidly melting glaciers and climate change. The global following and partnerships we’ve developed since the film’s release have only reinforced our commitment to the work of the Extreme Ice Survey. We currently have 27 cameras on glaciers in Antarctica, Greenland, Iceland, Canada, Austria, Alaska and the Rocky Mountains of the U.S. We supplement our time-lapse record with episodic repeat photography in the Swiss Alps, Canada, Iceland, and Bolivia. Our cameras record  changes in the glaciers every half hour of daylight year round, yielding approximately 8,500 frames per camera per year. We edit the time-lapse images into stunning videos that reveal how fast climate change is transforming large regions of the planet. 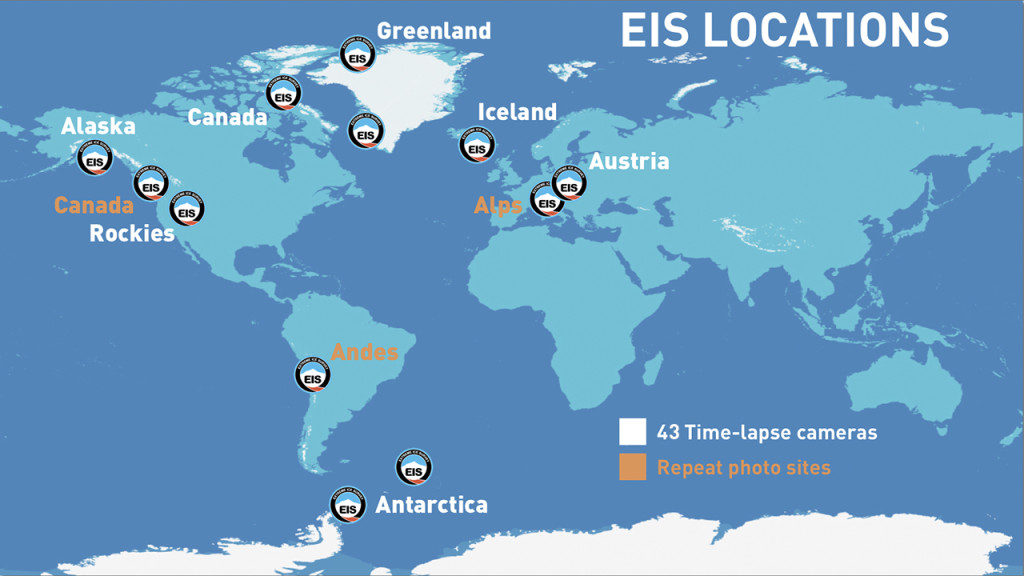 EIS is very much a team effort—the project involves close collaboration among Balog, Matthew Kennedy, and many experts in glaciology and atmospheric science, all devoted to documenting the changes transforming arctic and alpine landscapes today. EIS celebrates the otherworldly beauty of ice-cloaked landscapes while providing scientists with crucial data on the speed and extent of glacial retreat.

Visit our FAQ page to learn how EIS was started and about our future plans for the Extreme Ice Survey.

Track dates and locations of our traveling exhibition “ICE: Portraits of Vanishing Glaciers” and watch and share our videos with your community. It is our work to share the ‘voice’ of the glaciers with you; if you are moved and inspired by what the glaciers have to say, please use your influence to share our story and images.

Video footage of the Extreme Ice Survey in Action

This short video, including clips that were included in the award-winning documentary film Chasing Ice, shows a sneak peek at the Extreme Ice Survey team in the field. This footage was shot in Greenland, Iceland, Alaska, and Glacier National Park, when we only had 26 cameras in the field (we now have 43).

View our 7-year time-lapse video of Alaska’s Mendenhall glacier. You’ll see that the glacier “deflates”— like air releasing from a balloon. Notice how ice melts at the glacier’s edge, while thinning at the same time. Red lines indicate the size of the glacier in 2007, and again in 2014.

Watch how the Sólheimajökull Glacier in Iceland is retreating due to a combination of stream erosion and ice melt. The cracks (“crevasses”) that you see forming parallel to the flow indicate that the glacier is also spreading out (thinning) as it flows forward.